mellifluous [muh–lif-loo-uhs] adj. 1. sweetly or smoothly flowing; sweet-sounding: a mellifluous voice; mellifluous tones 2. flowing with honey; sweetened with or as if with honey

I like my camera. It wasn’t expensive but, sometimes, it takes some really good pictures. More than a few people have told me I have a good eye for shooting things.

The cool thing about a good photograph is it’s untouchable. It’s static and not responsible for anything more than it portrays. Although every part of my personality would suggest otherwise, I’m drawn to the unchanging nature of still photography.

So, today, I thought that instead of bashing one thing or another I find wrong with the world, I’d share with you some of the beauty I’ve found in it. Hope you enjoy.

From Oscar's Tavern in Philadelphia. 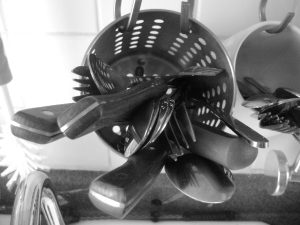 Silverware bin from my brother's kitchen.

The view from the back of the shore house. 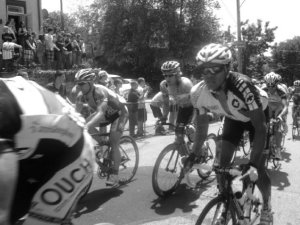 I’ve got tons more but thought it would be best to start out light. I’ll post more in an upcoming post someday soon.

You use your money to buy privacy because during most of your life you aren’t allowed to be normal. ↔ Johnny Depp

“Local Natives make soaring, sky-scraping harmonies, dreamy orchestral melodies, and throbbing tribal beats that bash their way into your soul.” That’s according to the band’s label, Frenchkiss Records. Obviously, the statement’s a bit biased but it’s also pretty dead on. Be on the lookout for constant comparisons to Vampire Weekend and Arcade Fire as Local Natives gets bigger. Check out “Stranger Things” off the recently released Gorilla Manor. (Thanks to Ezgi for turning me on these guys.)

→ All right, just because you discover something is possible doesn’t necessarily mean you make it happen. I love how this chef pairs the dish with a Riesling. Unreal.

→ For those of you shouting as loud as you can about how your privacy rights are being violated on the Internet by Google or the government or some other establishment you think of as “The Man,” you might want to reconsider your thinking. This woman might’ve gotten away with killing a Swedish artist. If it hadn’t been for those crazy kids at the Justice Department figuring out what she was up to before she had time to make it happen.

→ Yesterday, I was so immersed in Oscar hoopla that I failed to mention it was the 200th post to this blog. Can’t believe it’s been that many. Although, in a way, it’s sort of felt like more. Anyway, thanks for reading.

While I type this, NBC and Conan O’Brien are said to be close to a deal that will end the O’Brien’s stint as host of The Tonight Show after a mere seven months.

The complete failure of Jay Leno’s nightly 10pm show on NBC caused the network to move the 60-year old back to his original time slot of 11:35pm, leaving no place for O’Brien.

Everyone’s talking about it and there’s really nothing new to say on the issue but I’d like to encourage everyone who reads this blog to boycott Leno from here on out, in whatever forum the dipshit appears. It’s a heartless thing he’d doing here, not to mention meaningless.

Is NBC expecting everyone to watch Leno just because? Old people will probably go back to watching Leno because most old people, from as much as I can tell, like the kind of dopey crap he presents.

O’Brien will land on his feet. FOX is very interested in talking to him. Plus, he’s probably going to get somewhere near $40 million for his trouble. But still, NBC and Leno should be kneecapped for what’s gone on.

Everything is handed to society now. Before, you had to dig for it. I like that — digging for it. → Al Green

In my head, I’ve a list of ten songs of which I will never tire. R.E.M.‘s “The Great Beyond” is one of them. Maybe number three on that list. I’m not sure.

→ In a shocking development, MTV is actually producing a show featuring (I hope you’re sitting down) – MUSIC! Vampire Weekend did an episode of MTV Unplugged. And there wasn’t even a cameo by the cast of Jersey Shore.

colloquial [kuh–loh-kwee-uhl] adj. 1. characteristic of or appropriate to ordinary or familiar conversation rather than formal speech or writing; informal 2. involving or using conversation

As I type this, I’m watching a TNT promo for Southland. Last year, NBC dropped the cop drama before it even debuted. TNT scooped it up and will start running the series, in its entirety, this Tuesday. (TNT is waiting to see how the ratings go for the seven episodes NBC aired plus six never-before-seen ones before deciding to order a new season.)

As I’ve felt in the past, I’m currently confounded why some quality shows get the boot and other crappy shows (According To Jim, The Real World, Judge Judy, JAG) seem to run on forever. I guess it shouldn’t surprise me since quality entertainment seems to be a notion no one concern themselves with.

It got me thinking about some other shows that were inexplicably dropped before their time. The following is a list of my favorite shows abandoned too soon.

The National Rifle Association says that, “Guns don’t kill people, uh, people do.” But I think, I think the gun helps. You know? I think it helps. I just think just standing there going, “Bang!” That’s not going to kill too many people, is it? → Eddie Izzard

There’s not a ton of information out there on Seattle-based band The Pale Pacific (formerly The Pale). I came upon the 2005 release Urgency a while back and it became one of my favorite “half albums” – those containing an equal amount of both good and so-so songs. (I’ve got a lot of those, by the way.) One of the better songs is “Identity Theft.” Give it a listen.

→ I’m not so naive to think all of this wintry weather going on is proof-positive that global warming is hogwash. But -50° wind chills in the Midwest don’t exactly help Al Gore’s cause.

→ Someone needs to be in a world of hurt to attempt to stab themselves to death. That’s exactly what Howard Stern’s sidekick, Artie Lange, did. Nine times. Long bouts of depression and numerous episodes of drug abuse apparently led him to it. Here’s hoping the guy can find some kind of peace and shake loose of his demons.

→ The other day, I reported that Vampire Weekend and Spoon were releasing albums next Tuesday. I lied. Vampire Weekend is releasing Contra next week, but Spoon’s Transference won’t come out until two weeks later. In any case, should be a good couple of months coming up for new music with Ben Kweller, Eels, Beach House, David Bowie, Midlake, Hot Chip, Peter Gabriel, Field Music, Jason Falkner, Shout Out Louds, Rogue Wave, The Whigs, Aloha, Frightened Rabbit, Ted Leo and the Pharmacists, The Morning Benders and White Stripes all poised with fresh material.

the euneJeune daily
Blog at WordPress.com.