supine [adj. soo-pahyn; n. soo-pahyn] adj. 1. lying on the back, face or front upward 2. inactive, passive, or inert, esp. from indolence or indifference 3. (of the hand) having the palm upward ∞ n. 4. (in Latin) a noun form derived from verbs, appearing only in the accusative and the dative-ablative, as dictū in mirābile dictū, “wonderful to say.” 5. (in English) the simple infinitive of a verb preceded by to 6. an analogous form in some other language

One of the frustrating things about doing this blog is that I’ve never been able to put pictures up without disrupting the integrity of the entire post. So today, I’m going to try to do just that. So bear with me.

In my opinion, hockey teams have always had the best logos. Here are my top five of all time.

5. Anaheim Mighty Ducks – I know, it’s kind of lame, but I really like this logo.

4. Boston Bruins – My brother Jer made me a t-shirt with this logo on it.

1. Philadelphia Flyers – Obviously, the best logo in all of sports. 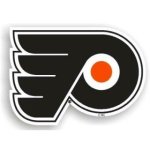 All right, so that was a success. More picture usage to come. Thanks for bearing with me on that one. And thanks for reading.

A preoccupation with the future not only prevents us from seeing the present as it is but often prompts us to rearrange the past. ↔ Eric Hoffer

A few months ago, I was at a Blind Pilot show and the last song the band performed was a cover song that I couldn’t place. Neither could the people I was with. Eventually, we figured it out. (Although there is some discrepancies over who actually did finally find the song.) In any case, that’s not really important. (But, it is, and I still say I’m right.) It was “Kids” by MGMT. I didn’t really care for the original version at first but, after having it beat into my head by two particular ladies, it’s growing on me.

→ I don’t get the whole notion of reading an entire book off of the screen of some handheld device but apparently I’m the only one. Yesterday, the geekverse revved up when Apple’s Steve Jobs unveiled the new iPad. Let the tampon-related jokes begin…now.

→ Could it be true? After years of withstanding the bitching of Philadelphia Eagles fans, could Donovan McNabb finally get a fresh start in a new NFL city? For everyone involved, I hope so.