obscurantism [uhb-skyoor–uhn-tiz-uhm, ob-skyoo–ran-tiz-uhm] n. 1. opposition to the increase and spread of knowledge 2. deliberate obscurity or evasion of clarity

I like to draw from time to time. I don’t do it enough but when I do actually sit down to draw, I’m always pleased with the results.

Here are some samples of what I’ve drawn. I apologize for the resolution since I had to take pictures of them because I don’t have a scanner. But I think you’ll get the idea.

This is a simple viewpoint from the living room of the house that Harv and I lived in on Maiden St.

A drunken rendering of the sunrise in Avalon.

The bottom of a tree outside the library at Saint Joseph's University. 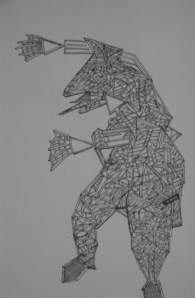 Some weird creature I drew with lines.

I have a lot more but I think I need to wait to get a scanner. These were just the best ones that came out with crude photography.

Yeah, I’m cocky and I am arrogant. But that doesn’t mean I’m not a nice person. ↔ Jeremy Roenick

You might recognize Cloud Cult‘s “Lucky Today” from a tv ad that aired a while back but it’s also kind of my theme song from time to time.

→ Louis C.K. was on Conan last night. It wasn’t as good as the last time.

→ In the sports world today, the NBA and the NBA Players Association are still nowhere near a compromise. And no one’s all that broken up about it.

→ Here’s Why Being The Office Jerk Could Pay Off. I got nothing left in the tank. Take from it what you will.